In Lawyers as Peacemakers, I wrote about the emerging movement.  At that point, I was reluctant to assign one name when so many were in use and I didn’t feel qualified to name a whole movement when I was just one member of a community.

Because the approaches go by so many names, I usually just refer to “the movement.” I sometimes also express it as an inquiry: “What if lawyers were peacemakers, problem-solvers, and healers of conflicts?”

Lawyers as Peacemakers was a turning point for me.  I went from being a weird lawyer to being recognized as a leader.  The Movement went from being known to a few fringe cultural creatives to a more mainstream audience.

In 2011, restorative mediation pioneer, Ken Jaray of Colorado, suggested it was time for a gathering of lawyers in the movement.   He agreed to play host to a summit in Manitou Springs, Colorado.  We thought that we would like to have a group of about 20 and therefore invited a few more than 30.

While this is blind-copied to a couple of dozen of you, this invitation is personal to you. We have hand-picked a cross-section of leaders in creating new models of legal practice, legal education and societal transformation.   I assure you that you are in good company.  Kindly take a few moments to read over our invitation.  If coming together with leaders who get things done appeals to you, please join us.

An Invitation to Change Leaders in Law

Over the years, I’ve come across some true leaders in this movement.  These leaders are the ones who create the visions and then, rather than just talking and delegating, they make sure that everything gets done. They’re always looking for what to do next that will make a difference. They’re on the cutting edge of ideas and projects. They tend to be people of broad interests, deep compassion, and solid intelligence in all the senses of that word: intellectual, emotional and spiritual intelligence.  They are the change-makers who help society evolve.  They are passionate about what they do and can’t imagine being any other way.

You are one of those leaders.

From time to time I have been blessed to have conversations with such leaders. On occasions where more than one of us has been in conversation, the energy we produced surely expanded the realm of what was possible in the world. Those conversations have blessed, empowered, strengthened and sustained me.  They have inspired me to carry on my work, to try new approaches, to step out in areas where I would otherwise not be confident.

My next step is to intentionally create spaces where we can come together for such powerful conversations, share resources and strategize about what to do next to build an integrated legal system that combines the stability and safety of the existing system with the human values of the emerging system.  It is time to add some conscious coordination of redesigning the legal system.

With Ken Jaray, one of these leaders in restorative mediation, I am putting together a think tank-oriented retreat in Colorado in October. It will be the first of what we hope will be many retreats where leaders are called together to share ideas, content, resources, and sustenance with each other.  The retreat will be by invitation only.  We see this as the first, foundational retreat of many more to come, perhaps even a leadership academy, and have put together a list of the most effective leaders we know.

We want to clone you, support you and celebrate you. We want to give you opportunities to co-create with each other. (In my life, it is a treat to meet someone with whom I can be my whole self and I don’t have to hide parts of my to-do list for fear of overwhelming someone.) We’ll be exploring how to teach leadership skills to lawyers, create sustainable projects and harvest knowledge to be shared among our community.  We’re looking for the most diverse mix of ideas, stakeholders and perspectives that we can get.  Academics, practitioners, administrators, and policy-makers are on the list of invitees – it is an impressive group. All have gone beyond the practice of law or teaching to create projects that benefit broader communities. 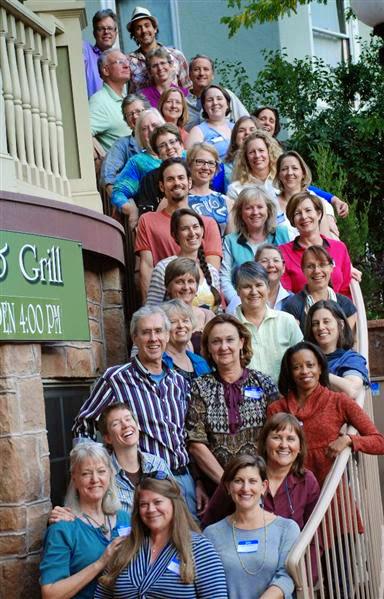 Our invitations were cognizant of diversity of all kinds.  In the end, thirty people accepted the invitation and attended the Summit.

It was a meeting without a preconceived agenda or structure, leaders coming together to talk about our work in the world.  We had judges, professors, law students, a legislator, and representatives of collaborative law, restorative justice, sharing law, business, intellectual property, securities and more.  Because we were beginning on Sunday and flights into Colorado Springs were limited, we arranged to begin with a conversation café-style session.  Questions were placed on tables and participants rotated from table to table every few minutes.   They got to know each other by their passions, purposes, and values, not their titles or jobs.  Camaraderie developed quickly.

The next morning, we sat in a circle.  Susanne Hoogwater, a graphic recorder and lawyer-mediator, captured our conversations.  We talked about what we wanted to do.  From the floor came a suggestion that we needed a name to describe the movement that encompassed all our legal approaches. 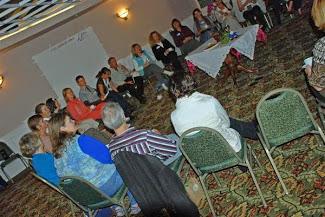 I was reluctant.  For more than a decade, I’d attended gatherings where the goal was to find a label that everyone could accept.  It hadn’t happened and I didn’t want to spend the whole event on that task.

Within five minutes, the name “Integrative Law,” was suggested and accepted by consensus. Several tracts of discussion were suggested and people broke into small groups to work on projects.

As we’d hoped, the term “Integrative Law” began to be used.   Many lawyers who heard the term embraced it.  Social media groups were formed by people we didn’t even know.  Organizations were created.

In August, 2013, the American Bar Journal even published an article with the headline: “Is the integrative law movement the next ‘huge wave’ for the legal profession?”

The article set out this description of Integrative Law:

Unlike traditional law practice, which is often competitive and aggressive, integrative lawyers are trying to simultaneously make a difference in the world, earn a good living and lead satisfying personal lives. According to Pauline Tesler, director of the Integrative Law Institute, integrative law is the “umbrella term for a variety of vectors that have become more widely known” in the past few years. The movement encompasses some forms of mediation, restorative justice, collaborative practice, and even elements of positive psychology and social neuroscience.

Integrative lawyers focus on out-of-court solutions and the well-being of all players in the legal system—lawyers and clients included. Over the past several years, the movement has gained momentum. And Tesler, who has trained more than 6,000 people in integrative law principles over the past 20 years, is convinced it is the next “huge wave coming to the legal profession.”